This is currently being displayed on my existing site, but designed for the new version of my website.

Well this is a new blog. How exciting. I'll try keep it upto date, from past experiences I know i'm terrible at doing that.. but I will try my best. I'll be honest this blog is really for me, not as a place to vent with no-one listening but feedback to myself to remember for next time. Hopefully some others could learn from it also. I'll try balance photos and text, really as a way to show more photos than I would normally in my portfolio.

Sigma are one of the biggest drum and bass acts in the world at the moment and this was the first d'n'b act to headline the world famous Royal Albert Hall. Having a string of successful Top40 hits with Nobody To Love and Changing (featuring Paloma Faith) both being consecutive number ones for the group.

Possibly my favourite picture. Annoyingly another photog's arm was in the way so the framing's off. 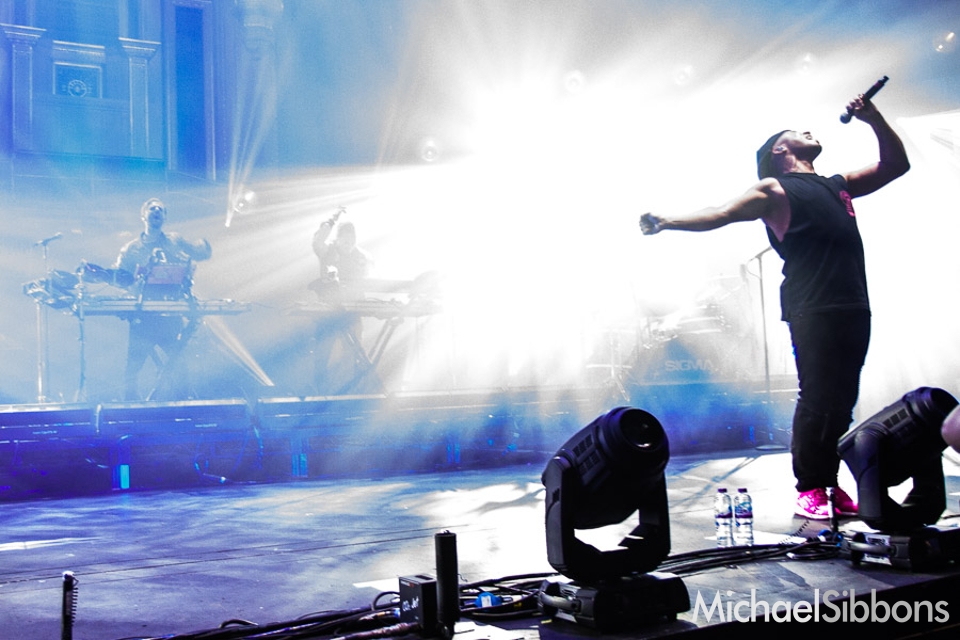 Sigma were supported by Stefflon Don. Usually I would shoot and review the support act to, but her management wanted approval on all copy/images so I didn't this time.

Royal Albert Hall probably needs no introduction. I've been going to gigs for over ten years now, mainly in London, but got to admit this was the first time I'd been to the RAH. Without a doubt this is the best venue in London. Brilliant view and phenomenal accoustics.

Royal Albert Hall on the way to the box office 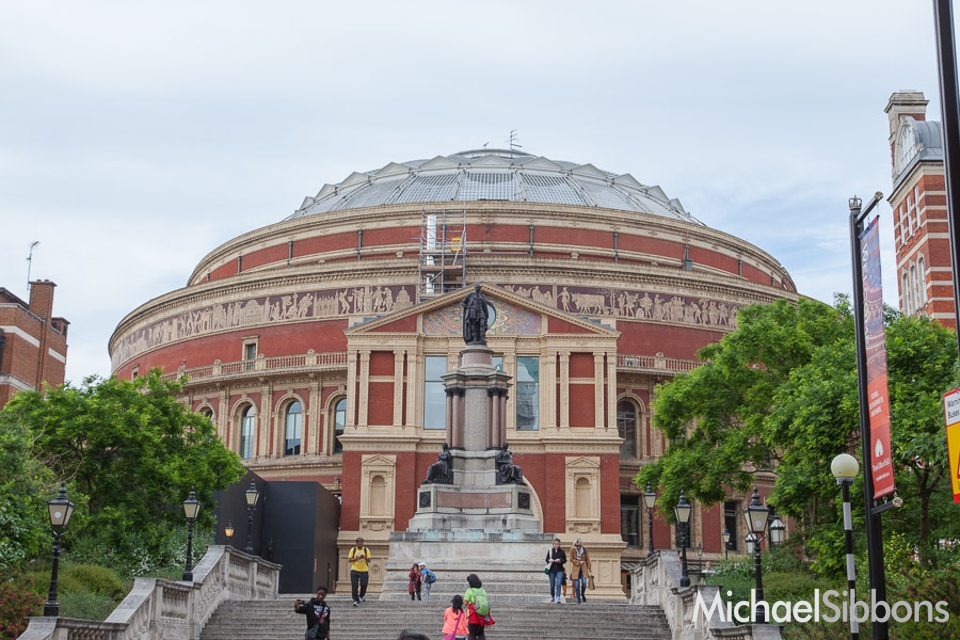 Logistics when I arrived were a pain. Naturally I think everyone was a bit stressed and probably a bit on edge (Manchester Arena had been attacked a few days prior). First off they couldn't find my tickets/photo pass causing me to be internally panicing (but atleast my name was down on the list). Next no-one knew where to send me, I spent far too long waiting by the stage door for a security guy to eventually come along and say be here for said time. Three songs no flash. Hey it took time but I had somewhere I knew I had to be.

The view from our seats 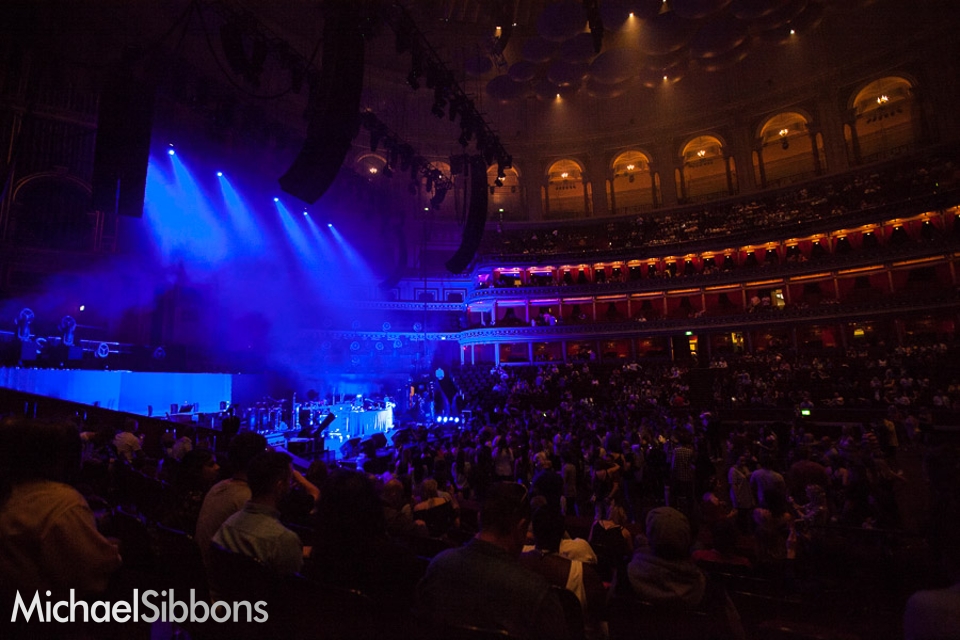 As well as pit access for the first three songs as I was also reviewing the gig I got the chance to sit down and watch the entire performance which is always cool.

I have no shame in saying I like dance music. However. Live performances can be hit or miss, it can either be a DJ standing there (the juries out on whether they're performing or mining) OR it can be performed live with a full band, this was the latter. Combined with lighting, lasers and all the other effects you could expect from a dance act it was a blinding performance (figuratively not literally).

Confetti cannon during the finale 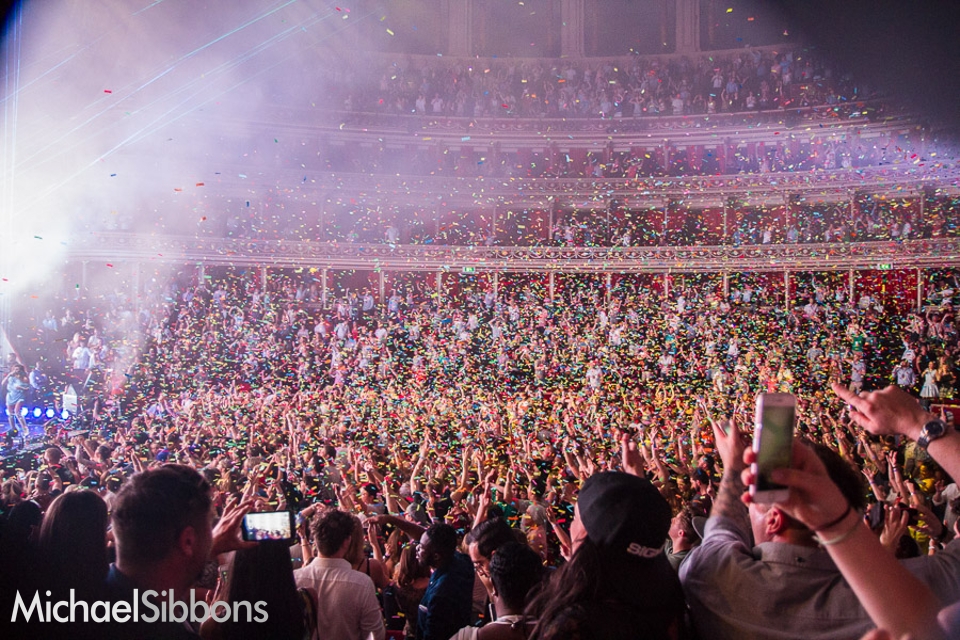 Playing an impressive set of 22 songs, consisting of material from their first album, new bits and a couple of covers they were on stage for almost two hours. Most of their songs feature other famous artists on vocals such as Take That and Birdy sadly none of whom (with exception of Maverick Sabre) joined them on stage. That being said, they were joined on stage by a full band, small string orchestra, various singers and hype men who made up for it.

Anyway make sure to check out my full review here.

I'd never been to the Royal Albert Hall prior so didn't know the scale of the venue. I also didn't know where I would be shooting from. One of the other photographers for Gig Junkies recently shot there and had to shoot from the sound booth with a 70-200 not sure if that was a one off, or if I had a pit pass I packed for every imaginable scenario (minus the kitchen sink): 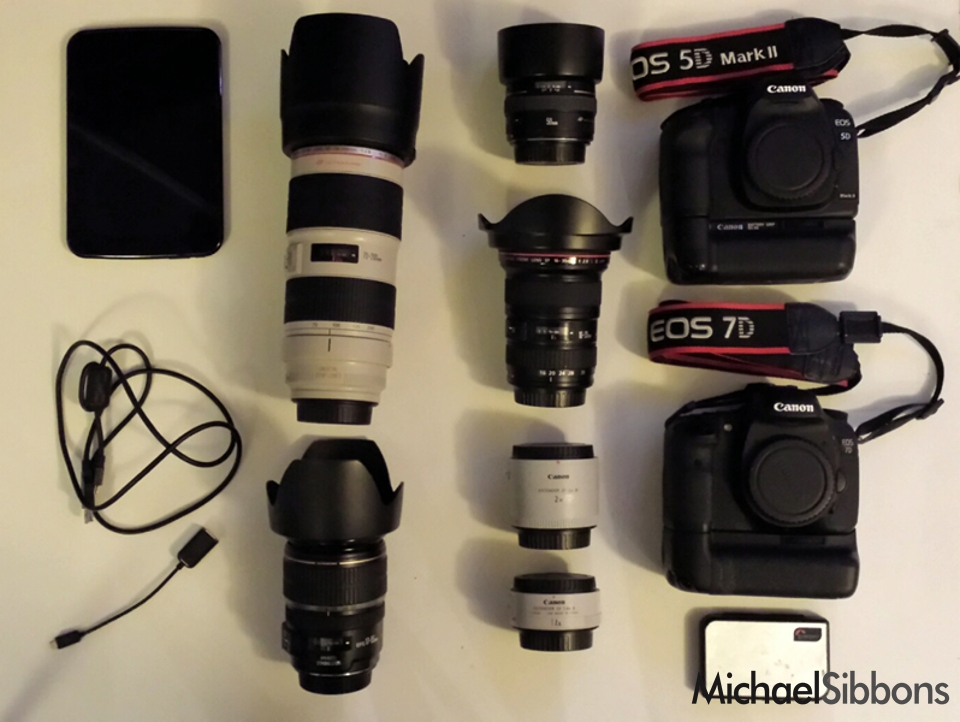 Luckily I got pit access so ended up shooting with the two bodies, the 17-55 and the 70-200. Problem was I didn't know this when I packed meaning I still had to drag the bag across London. It was pretty heavy as you could imagine.

I'll be honest. This was the first time in a long time I felt genuingly let down by my kit. I love both my cams but there are bits of them individually I like. 5D being FF with it's increased resolution and better low light performance. The 7D's improved auto focus and array of custom functions. I love being able to set different focus points for landscape and portrait orientation, and the auto ISO range is superior to that of the 5.
Sadly as I'm saving for a house at the moment an upgrade of kit is looking very unlikely for the forseeable. I want a matching pair of bodies but the 5D3 still retails for around £1600 and the 5D4 for around £2500. I would probably need a new fast midrange zoom as well, the 17-55 is crop only meaning even more money (although for the time being could make do with the 16-35 and 50).

I got pit access (yay) and three songs no flash, so pretty standard.

Starting to collect these again 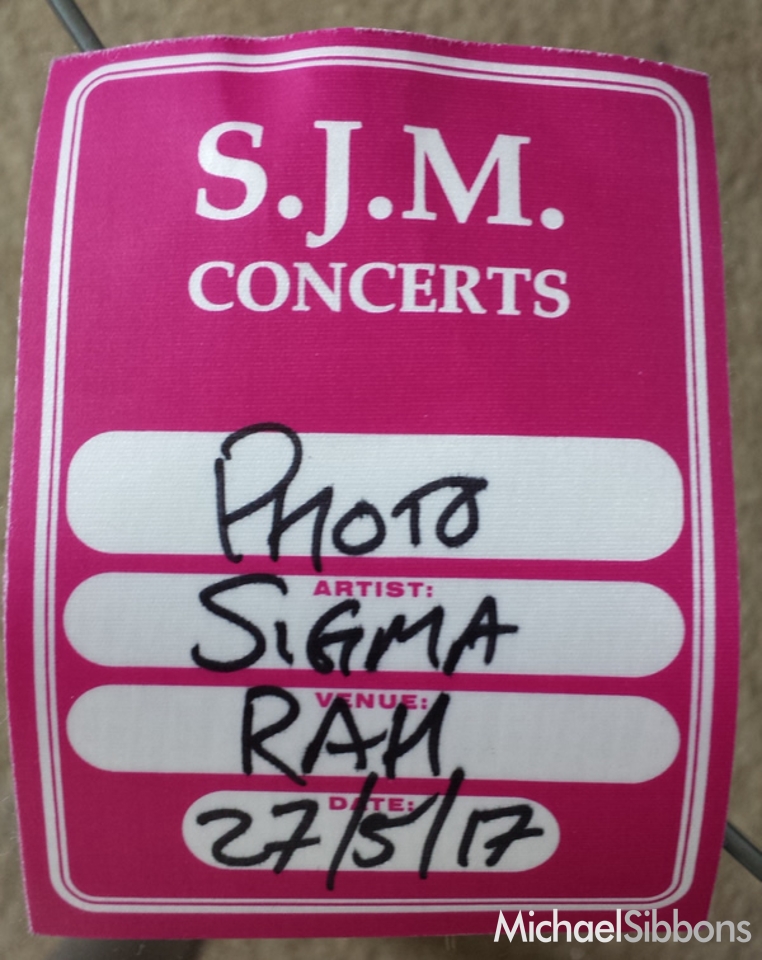 The majority of my photo work in recent years has been portraits and models. This has resulted me in shooting tighter crops and the standard portrait full lengths, upper bodies etc. At times this is OK, but for the majority of the gig stuff I'm finding I'm missing so much more going on, as well as the pretty light show.
Looking at other peoples work they mainly shoot landscape and wider. Getting more details of what's going on in. I need to start thinking like this. If I then want say a full length I can crop. 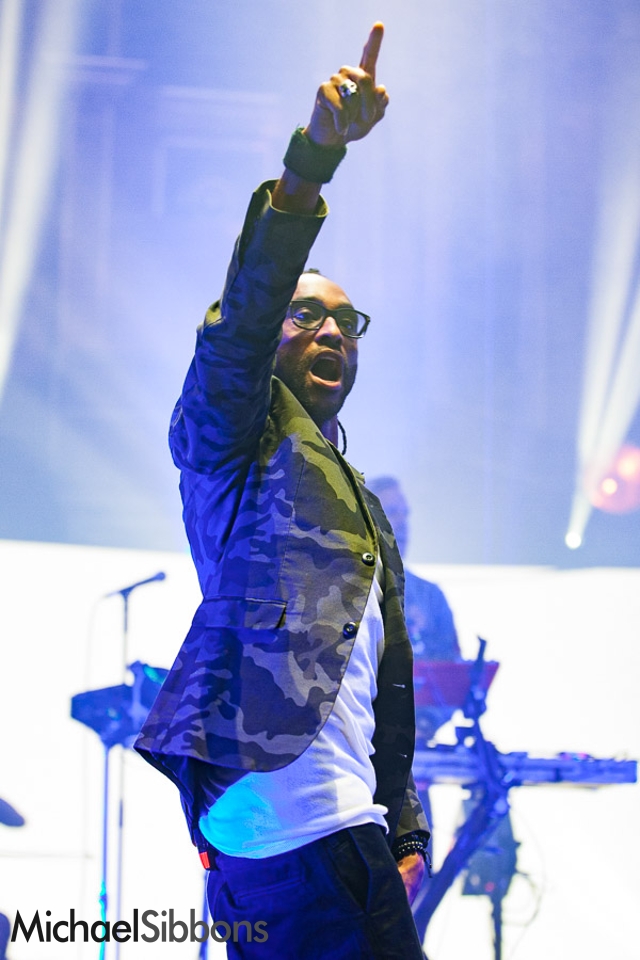 Settings was another problem I had.. I'd say the exposure for the majority was in the ballpark but I was definitly shooting slower then I should have been. Around the 1/125 1/160 mark. I was getting blur. I also didn't chimp as much as I should have been. Even some of the pics I delivered had a bit of in cases. Not necessarily out of place/noticeable but still, I prefer my images crisp. I've also found something really useful. Due to the terrible casting caused I'm now shooting using monochrome 'picture style' this means that on the back of cam images appear in black and white allowing to check exposure without worrying about the lighting. Really useful. Highly recommend.

Drummer, took a couple of rounds of recovery you can see via the noise 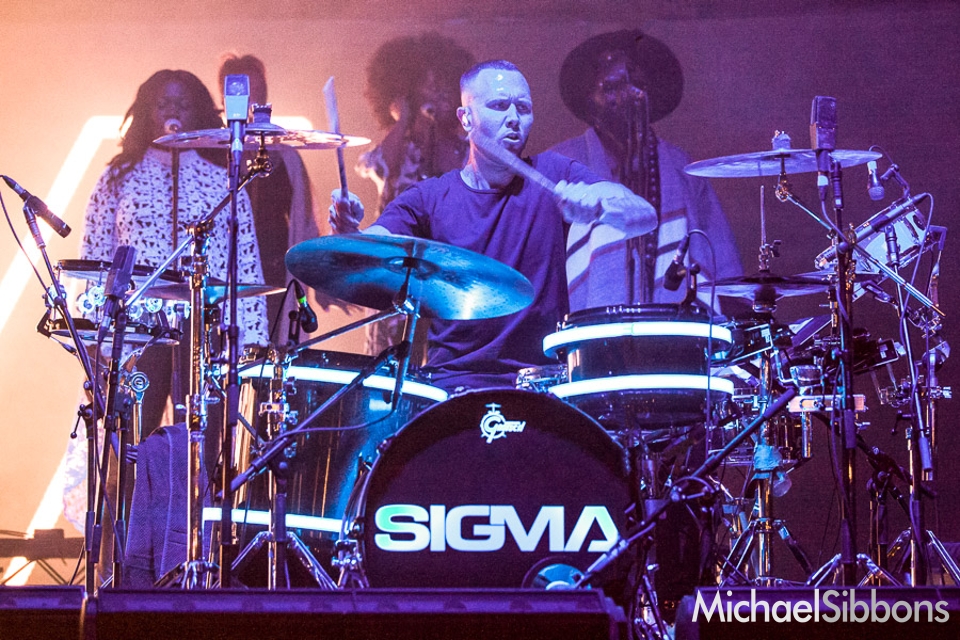 Having a pit to shoot from again was lovely. I could move. I wasn't restricted by the crowd and I didn't feel bad if I was in there way.

Oddly three songs was nice. I didn't walk away with GB of cards of photos I would have to trawl through with a rather sharpish turnaround. The downside is considerably less margin for error. The thing is though, after the three songs only two of us were removed from the pit. The other togs can't have all been for the artist/venue? Anyway, not having a nag, just jealous.

I also think this needs to be mentioned... there was a rope seperating pit access to the crowd... Well. I almost tripped up getting out, another photographer had to grab me to stop me falling over!

The lighting was bad, there were no spots, they were performing in front of a big LED bank and had lights from the top down. This meant the majority of the images had awful colour casts for the most part I couldn't remove. Some of the images have came out OK, which has made me wonder were there spots later on for the singers/hypemen, or have I just been lucky with the strobing? The situation was made worse by the fact unless you were fronting the stage you were at the back, in the dark, behind the smoke (dehaze in LightRoom is pretty useful here though)!

The lighting was OK here 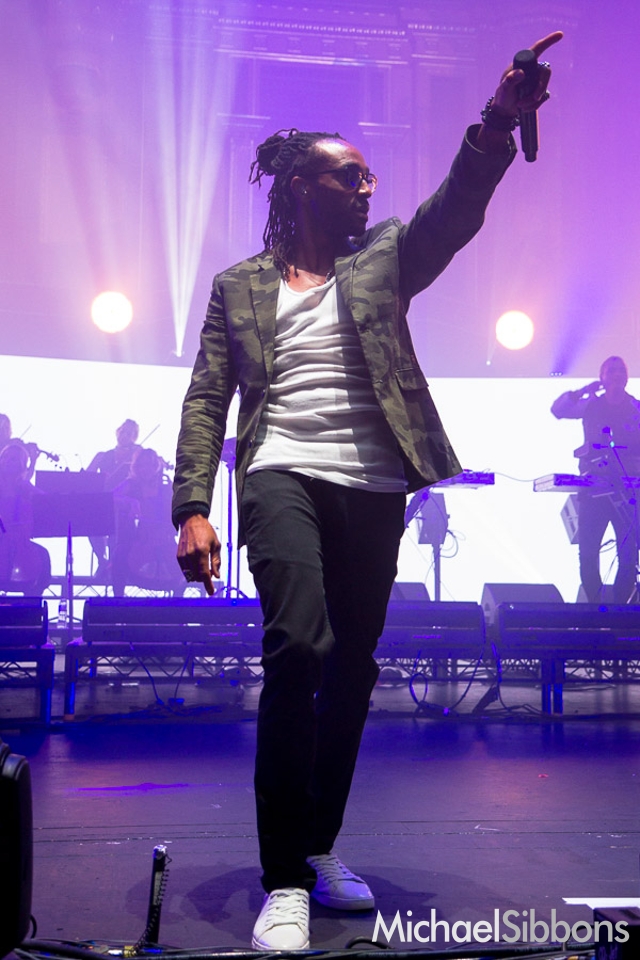 I'll be honest there's very few pictures I like. Mainly my fault. Partly the lighting.

I had to do far too much recovery on the images, so in some cases they're really contrasty making them look over processed and a bit rubbish.

One of the singers. Had to really process to make usable 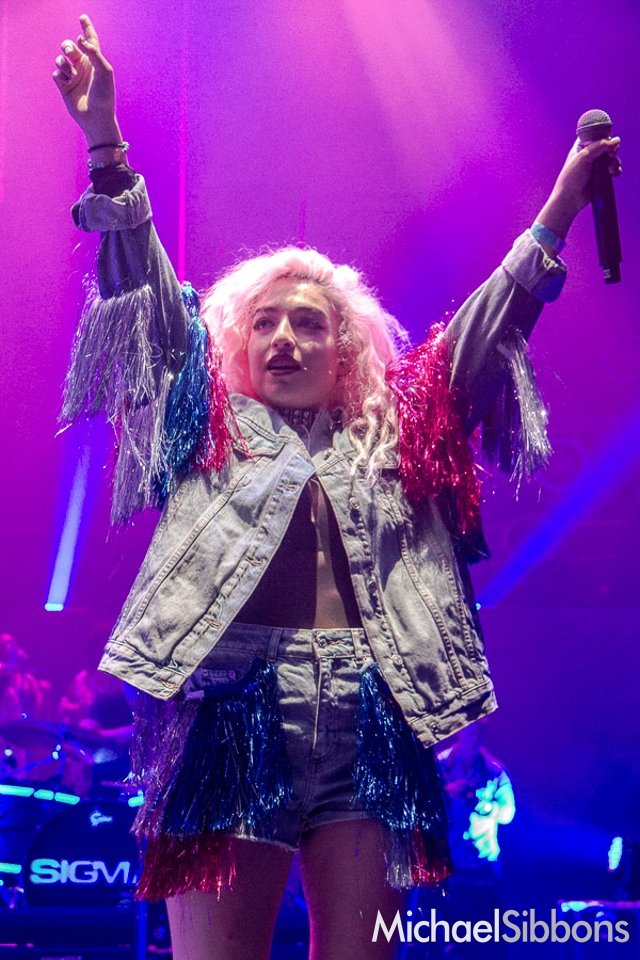 One of my favourites I annoyingly had to crop in order to remove another photographers arms, meaning it's not quite framed how it should have been.

The day before I released this blog I got an email from John D. Jenkins, the guy drumming for the Sigma live shows who asked if he could use my photo of him for social media. As it was non commerical I happily abliged, but it's nice to hear that my review (where he sourced the image from) is being read and the pictures seen!

Next shoot i'm booked for is the 6th June with Maria Pearce where it's back to straight forward fashion hopefully with a few gels for good measure!